Mona pulled the faded sheet over the window. She’d come to the desert fifteen years before to activate her consciousness and now she found herself living in a condemned trailer on the edge of tourist trap that sold alien brand beef jerky and dried scorpions. Who had lived in the trailer before she began squatting there? A single coffee cup still hung on a hook in the tiny kitchen. The cup boasted stylized flowers stamped around the rim. Mona wished she had someone to have coffee with.

Mona wondered what had happened to those fellow pilgrims who had made the journey with her so many years ago. Henry had become a charismatic cult figure somewhere in Apple Valley. What started as a mail-order religion had become an actual compound. Mona recalled the basic tenets of Henry’s religion involved love and hard farm labor. She’d seen the barefoot adherents selling seed packets on street corners in Hesperia.

What about Sharon? Sharon seemed to be the most serious of the spiritual seekers Mona had met. They’d both quit their jobs in Sherman Oaks to find wisdom in the arid wastes. Sharon believed in everything, aliens, dowsing, Catholic saints, the psychic power of animals, Kabbala and angels.

Mona felt dizzy when she contemplated such a baroque spiritual universe. She wondered how Sharon could keep it all straight. Mona sought a philosophy more like the desert itself, something that could be streamlined like the rocks and stars and mountains. She longed for a severe Zen-like beauty . But she’d had some run-ins with some Buddhists in the Valley that left her feeling that Zen wasn’t a whole lot of fun. Was there any spiritual discipline that allowed for a few laughs on the path to enlightenment?

And so Mona’s spiritual trek had foundered. Unsure of what tradition to follow, she concentrated on work, first waitressing at a cafe and then cleaning rooms at a motel that looked abandoned. In some ways these jobs seemed like the spiritual work she’d been seeking more than her days of meditation in the Integratron. The repetition of making beds, replacing towels and cleaning sinks held some inherent honesty and discipline that appealed to her. But the cafe and the hotel eventually went under and Mona found herself a homeless wanderer.

She picked up a few hours selling souvenirs in the alien jerky shop. She washed in a narrow bathroom at the back of the store. Rick, the owner, had offered her the old trailer in his backyard. “I’ll even throw in a few blankets,” Rick added.

At night Mona lay on the floor looking at the stars through the large cracked window. Her eyes traced the hard edges of the constellations. Mona tried to find the cosmic lesson in selling alien jerky. She closed her eyes and saw the faces of the tourists that drifted around the shop. They were all seeking something too. A momentary distraction. A diversion in a landscape that forced them to confront themselves. Mona saw herself as one of them.

Maybe tomorrow she’d ring up some rock candy and incense for someone on his way to Vegas or points beyond. She might ask if they had room for one more in their car. She could find work in the city, or she might have a conversation with the driver that would profoundly shift her feelings toward God. As the stranger spoke, God would finally take on the contours of a physical being. God might finally have a face.

From her daily station at the cash register, Mona could see in the pupil-less ebony eyes of the alien mascot all the allures of the vast unknown. The mascot stood about five feet high. In his green hands he held a candy dish offering cheap lollipops to the patrons. Sometimes when she refilled the dish, Mona caught a vision of herself reflected in his black glass orbs. And she saw herself as a cosmic visitor might, with a degree of detachment and curiosity, but tenderness too for her own strange nakedness which stood out against the desert sun and melted into the desert dark. 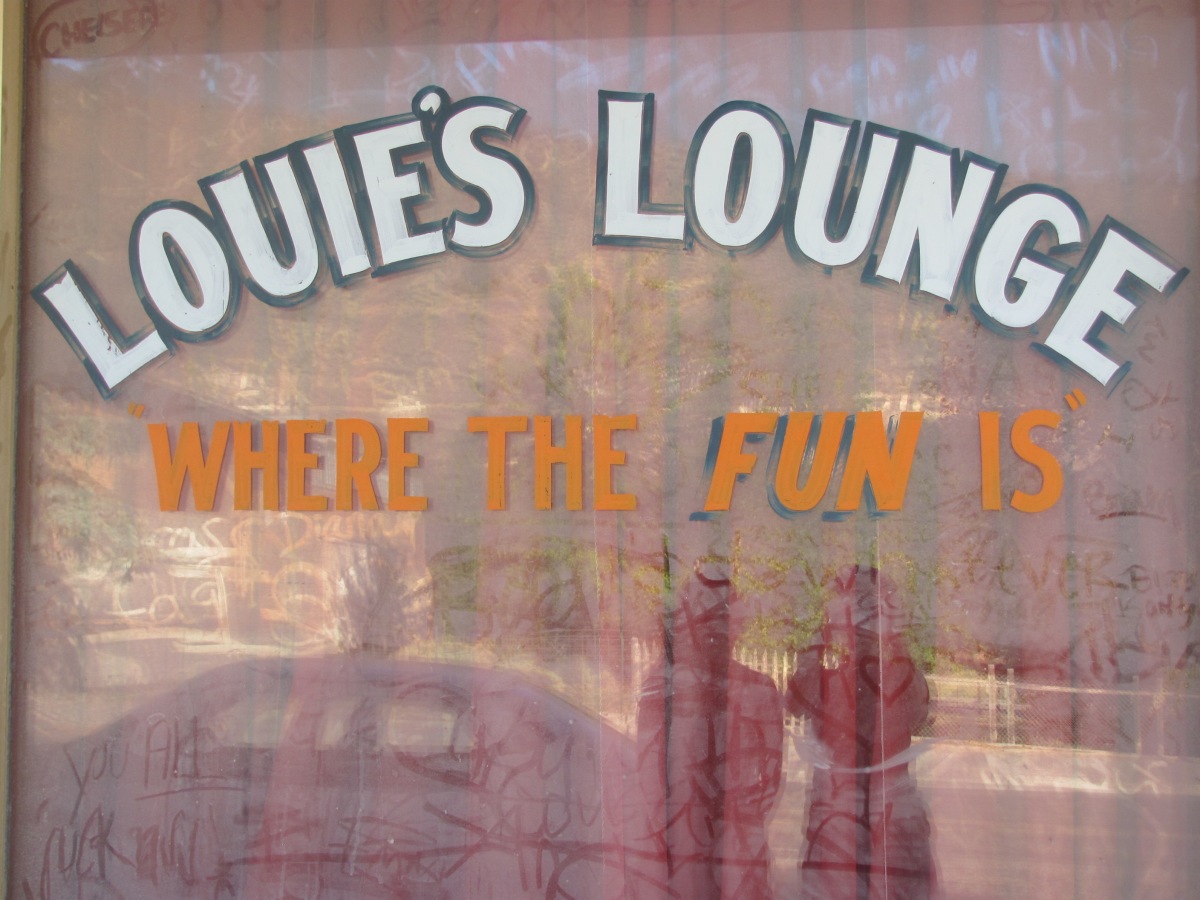 When he’d opened his bar in 1985, Louie wanted everyone from frat boys to the most sad sack drunks, to put down their burdens and enjoy life. His philosophy of sanctuary and reverie was encapsulated in a simple message in the front window: Louie’s Lounge: Where the Fun Is.

But a decade later, things had changed. Louie’s wife accused him of contributing to the moral decay of the nation. His soul searching after their acrimonious split led him to an impossible crossroads. Dispensing liquor to the masses was a morally suspect occupation. Yet dispensing liquor (and fun) was all that he knew.

Searching for insight, Louie devoured philosophy and Native American wisdom. He decided the bar needed a makeover to match his internal transformation. Vestiges of spiritual immaturity abounded in the saloon. What about the the inflatable skeleton embracing the giant gin bottle? Or the flocked 70’s wallpaper with its repeating patterns of top hats and dice? He’d change the facade starting with the window. Louie’s Lounge: Where the Fun Is. He needed a new message designed to appeal to a loftier breed of recreational drinker:

Louie liked the third option. A little long maybe, but at least it invited spiritual reflection. He hosted poetry readings and spiritual book clubs and pop culture salons. A different strain of customer began to frequent the bar. Bookish and destitute, this new breed nursed beers and pontificated on everything from Red Cloud to Redd Foxx. Yet instead of being energized by this infusion of intellectual energy, Louie felt depressed. He missed the sound of the frat boys the way a city-bound poet might miss the call of a loon over a lake. Only a few hardcore faithful remained.

“What happened to you Louie?” asked an old drunk named Wagon Wheels. “You used to be so much fun.”

“I guess I grew up,” Louie mumbled.

“Or maybe you just got old.”

Wagon Wheels shuffled out the door leaving Louie alone at the bar to contemplate the rummy’s harsh truth. He had cultivated the company of intellectuals only to find the greatest wisdom came from a man who once ate glass on a dare. Could sagacity be found in fun? What was the philosophical importance of having a good time? It wasn’t too late. The old customers would return. He would call them. Louie propped open the door with a large ceramic pirate and turned on the football game. Blasting Foreigner on the jukebox, Louie stood in the doorway savoring the mixed up siren song of his people. 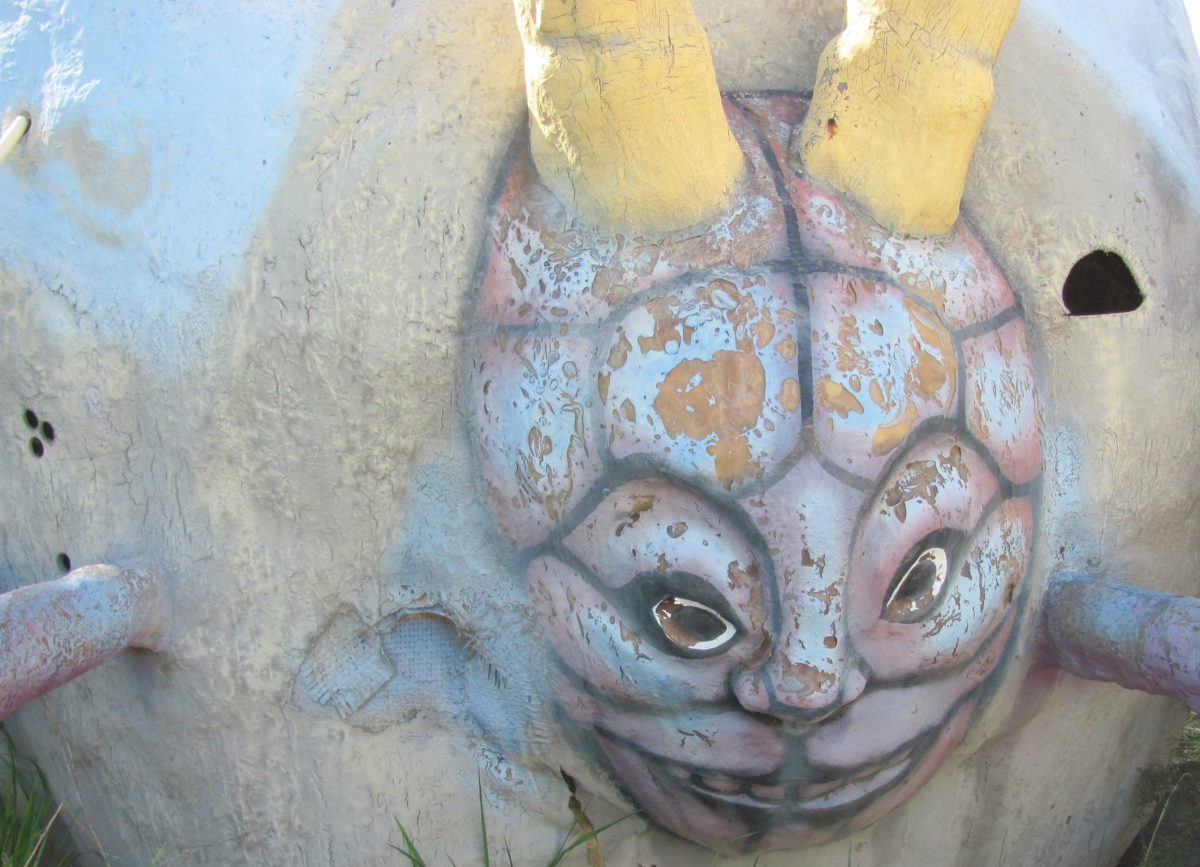 They all went there to die: the cowboy, the giant bug, the bootleg Grimace. Wheeled in from carnivals and carwashes, from amusement parks and playgrounds, chipped and sun-faded and hazardous. No children ambled up onto their comical, outsized bodies. No motorist stopped by the side of the road drawn by their towering size, their frozen hands clutching a lasso or a donut. They saluted the air. Tree branches grew around their bodies. Teenagers smoked pot under the grinning, decaying ladybug, daring each other to scale the lumberjack’s pant leg. The giants seemed to accept their fate. The obscene pig with the chopped off legs reveled in the sun. Only the enormous hands seemed perplexed, fingers posed somewhere between prayer and commerce, the nails menacing. 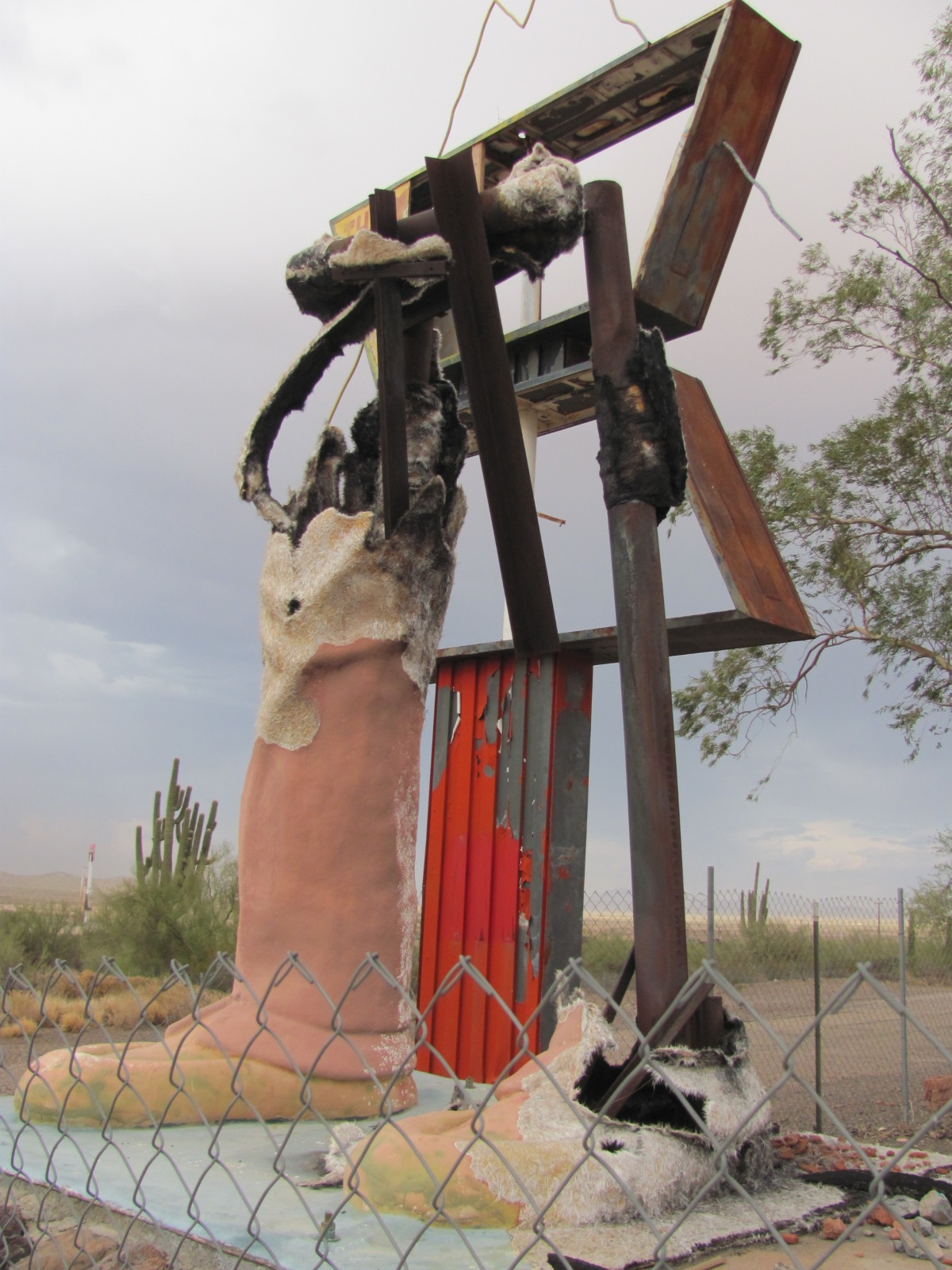 After mass, Johnny and I wandered through the Crazy Teepee, confessions dissolving in our mouths. The priest had told us that Christ was everywhere so we began searching through the rows of old bicycles, the racks of heavy coats. In the pocket of a woman’s suit jacket, I found a holy card of St. Francis with a funeral announcement printed on it.

St. Francis was so lucky to have all the animals come to him.

I always wanted to be a guy like that.

Right there, Johnny said. Between Reagan and Nixon badges rested a palm-sized picture inside a circle of glass. Doesn’t that look like your mother?

I’d never seen the picture before.

Where did this come from? I asked.

The clerk shrugged. Some box full of Christmas stuff.

Had an old flame stored her image in the attic among the glitter balls and tangled lights?

I turned the picture over.

Twelve dollars? I asked, digging in my pocket for the cash.

No, the clerk said. Twelve hundred.

Why so much? I asked.

It’s rare, the clerk said. I’ve never seen one like it.

But it’s my mother, I said.

He shrugged. I’m sure you’d agree that she was one of a kind.

My ears burned. I stared at the tiny image.

The clerk extended his hand. If you’re not going to buy the picture it needs to go back in the case. I have work to do. I can’t stand here all day.

I’d last seen her somewhere in the wilds of 1979. Still snow on the ground. The sun shone through the window of the hospice. A good send off. A cloud of morphine. Hymns playing.

As Johnny and I left the Crazy Teepee, I pictured my mother’s face floating in a box of anonymous tinsel and contemplated her eventual home between the faded presidents.

You’ll never know, Johnny said, so you might as well not wonder.

I was thinking of Saint Francis with his soft halo in the pocket of the woman’s jacket. How long did he wait balancing those birds on his fingertips, for someone to liberate him?

I was remembering the hospice, the long icicles dripping in the sun, how when it was all over the nurse opened the window. For the soul, she explained.

We’re going back, Johnny said. Once my check clears, we’re going to go back to the Teepee and talk him down.

My mother trapped under glass. My mother escaping through the window.

I took a deep breath of the spiky December air.

It doesn’t matter Johnny, I said.

I smiled but I felt that I was my mother smiling. The world looked harsh and beautiful, as if I’d been gone a long, long time. 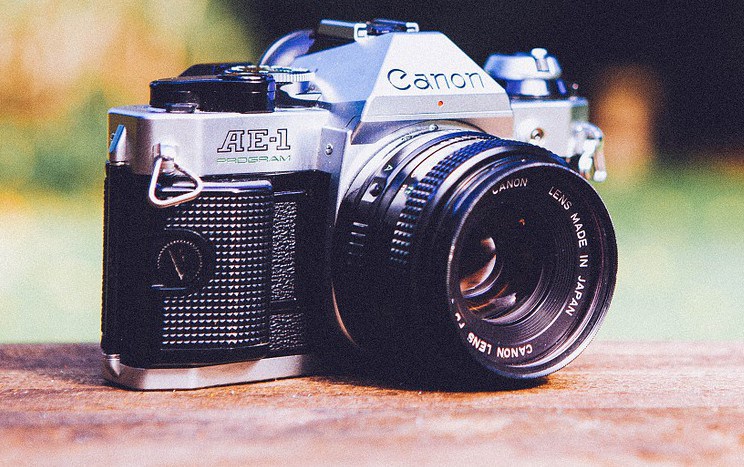 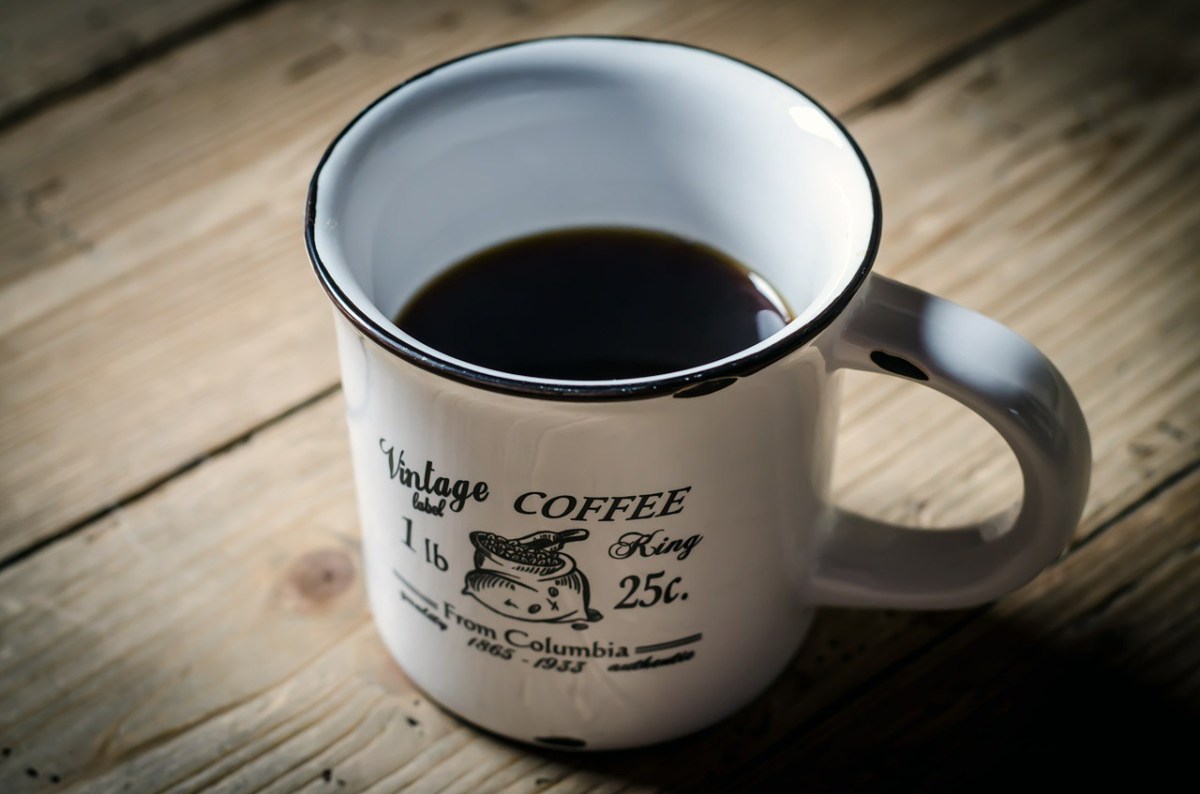 This is an additional placeholder post. Click the Edit link to modify or delete it, or start a new post. If you like, use this post to tell readers why you started this blog and what you plan to do with it.